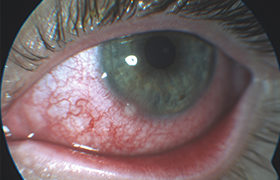 The authors present case reports of two women, who were hospitalized in Department of Ophthalmology, University hospital Hradec Králové for ocular symptoms of rosacea. In the beginning there were relatively severe objective findings in the anterior segment of the eye in both cases – significant cornea graying with superficial and deep cornea vascularization in both eyes. On faces of both patients there were more or less typical sings of general illness. Especially in the first case there were severe papulopustules with crust all over the face. Subjectively Patients describe characteristic symptoms of dry eye. After dermatological consultation local and general anti-inflammatory treatment was set with consequent condition improving in both cases patients. In both cases we use two different general therapy formula according to literature (Azitromycin x Doxyhexal). In one case report, we found distinctive non-compliance during aftercare on our department with serious consequences.
The purpose of our report is to point out ocular complications of rosacea and importance of oftalmologist´s and dermatologist´s cooperation during therapy of this illness with can lead to permanent damage of front segment of the eye and significant loss of visual acuity.