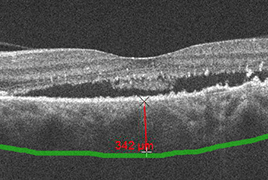 Pachychoroid disease of the macula includes four stages: pachychoroid pigment epitelopathy, central serous chorioretinopathy, pachychoroid neovasculopathy, and polypoid choroidal vasculopathy. Their basic common features are increase in choroidal thickness ≥ 300 μm, pathologically dilated choroidal vessels in the Haller’s layer with thinning of Sattle's layer and choriocapillaris layer. We report the case of a woman at the age of sixty-one, in which we have monitored the complete development of this disease within 8 years.