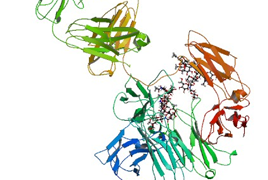 Published in Czech and Slovak Ophtalmology: 2018 - 2

The aim of the study: Retrospective evaluation of the first 12 months treatment of macular edema in BRVO with ranibizumab based on anatomical and functional parameters.

Methods: 54 eyes with macular edema complicating BRVO were included in the study, with an average initial best corrected visual acuity 4/16 ETDRS charts, an average central retinal thickness 512.3 μm, and in average 4 months till the beginning of treatment with ranibizumab. After 3 initial injections of 0.5 mg ranibizumab treatment was performed in pro re nata regimen, with adjuvant laser (grid laser photocoagulation) as an additional treatment option. The number of injections administered, the number of eyes where grid laser photocoagulation was provided, functional parameters as a letter gain and BCVA (eyes with final BCVA ≥ 4/8 ETDRS, final BCVA in according to initial BCVA) and anatomical parameters as a mean CRT and CRT ≤ 250 μm, respectively ≤ 300 μm were evaluated.

Conclusion: When applying a relatively low number of injections in the first year of treatment with ranibizumab, the final best corrected visual acuity was very good at the end of the observation period, and its dependence on the initial best corrected visual acuity was confirmed. Satisfactory results of central retinal thickness were found as well.