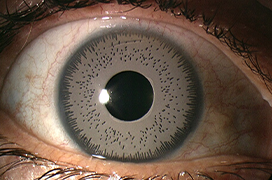 Published in Czech and Slovak Ophtalmology: 2022 - 1

In this paper, the authors present a case report of a 46–year–old patient with decompensated pigmentary glaucoma and anterior uveitis after unilateral implantation of a BrightOcular artificial cosmetic iris (Stellar Devices, New York, USA). Postoperatively, there was a decrease of endothelial cells (ECD) down to 1216 cells/mm2, a uveal reaction in the anterior chamber and a significant decompensation of intraocular pressure (IOP). During the first examination at our clinic, the explantation of the artificial cosmetic iris was indicated. However, despite all warnings, the patient repeatedly refused this procedure. The patient later decided to undergo the artificial cosmetic iris explantation due to persistent elevation of IOP with intense eye pain. The cosmetic iris implant was removed almost five months after its implantation. Postoperatively, the anterior uveitis resolved, but there was a further decrease in ECD of 130 cells/mm2 and also an increase in IOP, despite maximal antiglaucoma therapy. Nearly one month after removal of the artificial cosmetic iris, the patient underwent implantation of the Express P50 drainage shunt (Alcon Inc, Fort Worth, TX, USA). After the drainage procedure, IOP was normalized and remained within physiological limits during the first year after surgery. Thereafter, there was a recurrence of elevated IOP, which subsided to normal, after initiation of a combination of two antiglaucoma therapies. Four years after surgery the eye was quiescent, ECD stationary, the optic nerve head was stable, and the visual field remained within the physiological norm. This case report highlights a potentially harmful procedure that is presented as a relatively safe alternative for an iris colour change, representing a deceptive marketing strategy for companies trading in these implants.