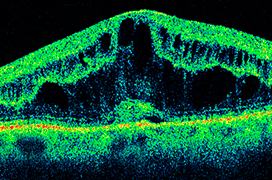 Lucentis In The Treatment Of Diabetic Macular Edema, Two-Year Results

Published in Czech and Slovak Ophtalmology: 2022 - 1

Aim: To evaluate, on the basis of two-year observations, the effectiveness of intravitreal treatment with Ranibizumab in patients with diabetic macular edema (DME) unresponsive to the previous laser treatment.

Cohort and Methods: A retrospective study evaluates 29 eyes of 29 patients with diffuse DME unresponsive to their previous laser treatment. The group of the patients consisted of 16 males (55.1%) and 13 females (44.8%); their mean age was 71.3. The mean duration of diabetes mellitus was 13 years (3–20). 19 patients (65.5%) were treated with insulin, 10 patients (34.4%) were treated with peroral antidiabetics (PAD); the mean HbA1c value was 52 mmol/l. The treatment was started with 3 initial doses of intravitreal injections of Ranibizumab 0.5 mg. There was a one-month interval between the applications. Subsequent evaluations and administrations of the following injections were made in the pro re nata (PRN) mode; the check-ups were carried out every month during the first year and on average every 3 months in the second year. The monitored parameters: the best corrected visual acuity (BCVA) measured on ETRDS (Early Treatment Diabetic Retinopathy Study) optotypes, the central retinal thickness (CRT). These parameters were monitored prior to the treatment and then in the 3rd, 6th, 9th, 12th, 18th and 24th months.

Conclusions: Intravitreal Ranibizumab injections reduce CRT and improve BCVA in patients with DME who did not show any improvement after laser treatment. The best effect was documented after the three initial applications of Ranibizumab and then at the end of the monitoring period. In two-year time period we detected CRT decline in 79.3% of the patients and BCVA improvement (by 15.3 letters on average) in 65.5% of the patients.