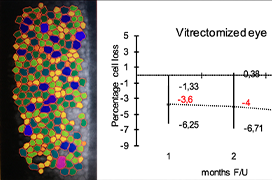 Published in Czech and Slovak Ophtalmology: 2021 - 5

Aims: To analyse the changes in endothelial cell density (ECD) after pars plana vitrectomy (PPV) and to identify the factors implicated.

Patients and Methods: This was a prospective, consecutive, and non-randomised, case-control study. All 23-gauge vitrectomies were performed by a single surgeon at a tertiary centre. ECD was measured at baseline before surgery and on postoperative Days 30, 90, and 180. The fellow eye was used as the control eye. The primary outcome was a change in ECD after PPV.

Conclusions: Routine pars plana vitrectomy had an impact on the corneal endothelial cells until Day 180 post-op. The phakic status was slightly protective against ECD loss after PPV, although it was not statistically significant. The pathophysiology of corneal cell damage after routine PPV remains unclear. Further studies are required to confirm these findings.