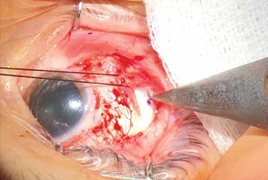 Published in Czech and Slovak Ophtalmology: 2020 - 1

Purpose: Penetrating eye trauma with an intraocular foreign body is very frequent, especially in men in their productive age. Pars plana vitrectomy would be the standard surgical method at our department. However, in indicated cases (metallic intraocular bodies in the posterior eye segment in young patients with well transparent ocular media without detached ZSM and without any evident vitreoretinal traction) transscleral extraction of the intraocular foreign body is performed using the exo magnet, eventually endo magnet with a minimal PPV without PVD induction under the visual control of endo-illumination.

Materials and Methods: Between June 2003 and June 2018, 66 eyes of 66 patients diagnosed with a penetrating eye trauma caused by an intraocular foreign body located in the posterior eye segment were treated. In 18 eyes (27,3 %) with a metallic foreign body in vitreous (body) or in retina, no PPV or a minimal PPV without PVD was used as a surgical method. In the remaining 48 eyes (72,7 %), a standard 20G, respectively 23G PPV method were used together with PVD induction and the foreign body extraction via endo or exo magnet.

Conclusions: As demonstrated by our survey/study, in the cases of a thoroughly considered indication an experimented vitreoretinal surgeon can perform a safe NCT transscleral extraction from the posterior eye segment via exo magnet, eventually endo magnet under the visual control of a contact display system with a minimal PPV. Thereby, the surgeon can enhance the patient´s chance to preserve their own lens and its accommodative abilities as well as reduce the risk of further surgical interventions of the afflicted eye.