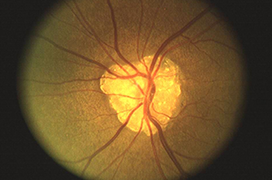 Purpose: The problem of optic disc drusen (ODD) has been described in detail in several publications. However, less attention has been devoted to real haemodynamic parameters (HP) in ODD. It has been clinically demonstrated that the occurrence and progression of changes in the visual field in ODD are closely linked with the haemodynamics of the vascular supply of the eye – the optic nerve. ODD may visually overlap excavation of the disc of the optic nerve, on the basis of which it is more difficult to evaluate changes (scotomas) in the visual field in the case of glaucoma.

Conclusions: HP are more often impaired in “large” optic disc drusens (group III), rarely in group I ODDs – though this is not an absolute rule. It is not possible to predict haemodynamic parameters according to the size of the drusen formation in the optic nerve. It appears that impairment of the haemodynamic parameters is conditioned not only by the size of the ODD, but also by the locality (distance from lamina cribriformis) and also the intrapapillary relationship to the vascular system.