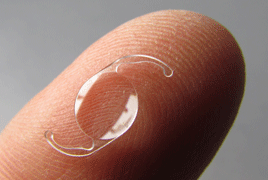 Published in Czech and Slovak Ophtalmology: 2018 - 6

Pupose: To experimentally compare the visual acuity and the subjective perception of different types of multifocal intraocular lenses (IOL) using a VirtIOL device/simulator in a group of volunteers with artephakia.

Results: The CDVA evaluated using the VirtIOL device was very good for all tested IOLs (0.04-0.09 log MAR) with minimum differences. However, CDVA without simulator (-0.01 logMAR) was statistically significantly better in all cases. DCIVA was also very similar in each of the investigated IOLs, surprisingly even with monofocal IOL (0.21-0.23 logMAR), without using simulator the DCIVA was statistically significantly worse (0.36 logMAR). The DCNVA was the best for PanOptix intraocular lens (0.22 logMAR); M-flex, Symphony and WIOL-CF lenses had comparable results (0.31-0.34 logMAR). Again, surprisingly similar results were obtained with the use of monofocal IOL (0.36 ± 0.14). Subjective perception of vision through the IOLs was best rated for the monofocal control IOL, whereas Symphony, WIOL-CF and M-flex did not show any statistically significant difference either with or without glare. All tested IOLs were statistically significantly better if compared to PanOptix with or without glare.

Conclusion: Simulation of vision through IOLs using VirtIOL simulator allows to compare different models of multifocal IOLs from the viewpoint of visual acuity and subjective perception. However, some caution should be exercised when evaluating the results, given that in our experiments, the monofocal IOL achieved relatively good results at near distance, which does not correspond to clinical experience. On the contrary, from the comparison of the results of CDVA without and with VirtIOL, it is obvious that visual acuity is slightly adversely affected by added optics.