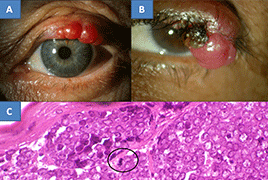 Aim: To get acquainted with the issues of Merkel cell carcinoma (MCC) when the eyelid is affected and with its surgical solution.

Materials: MCC of the right upper eyelid was at the Department of Ophthalmology in the Faculty Hospital Královské Vinohrady in Prague (Czech Republic, EU) in 1998 woman 78 year. Another cases of the MCC on the left upper eyelid were observed in two women aged 48 and 67 years and they were pick up in a retrospective study covered 1033 operated tumors eyelids years 2007 – 2015. 47,5% of operated tumors were benign and 52,5% malignant. Most common malignant processes were basal cell carcinoma in 77,3% and squamous cell carcinoma at 15,7%.

Results: The oldest patient died after three years of cardiopulmonary failure. 48 year old patient (age of diagnosis MCC) has been monitoring for five years without proven recurrence or metastasis dissemination. Oncological initial staging was negative regarding. An ultrasound examination of the lymphatic system of the neck was followed every six months. Another 67 year old patient (age of diagnosis MCC) was followed for 2,5 years. There was a suspicion of a metastatic process in the same side salivary gland and lungs, therefore chemotherapy was performed. Definitely, this process has not been proven. Now there is continuing follow up without sings of local recurrence or metastatic dissemination.

Conclusion: The authors confirmed a rare occurrence of MCC, and only 0,37% among malignant eyelids tumors. Essential importance for successful treatment is a sufficiently radical excision supported by histological verification and a subsequent plastic surgery of the eyelid is also necessary.