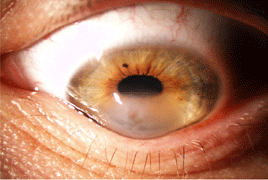 The thesis deals with comparison of topographic corneal indexes and their importance for the diagnosis of corneal ectatic disease. The corneas with different stages of keratoconus, forme fruste keratoconus, pellucid marginal degeneration, corneal warpage syndrome, and physiological cornea with varying values of regular astigmatism were included in the tested group. The study was conducted in 2015–2018 at the European Eye Clinic Lexum Brno. The study group contained 208 eyes, 111 eyes with keratoconus, 31 eyes with forme fruste keratoconus, 23 eyes with pellucid marginal degeneration, 10 eyes with corneal warpage syndrome and 33 physiological eyes. 19 corneal parameters and indexes were monitored for these ectatic diseases, which were compared with healthy corneas with regular astigmatism. A single-factor ANOVA test, a Student t-test were used for statistical analysis. Pearson's coefficients were used to assess the correlation. In all the observed tomographic parameters a statistically significant difference was found between the physiological and ectatic group of corneas. The parameters with the highest statistical difference were BEThLo, ISV, IHD, D, Rmin. Statistically significant indices were also found between the forme fruste keratoconus and physiological corneas. The best parameters for detecting the subclinical keratoconus were the back elevation at the thinniest point of the cornea (BEThLo), the difference between the thinniest and the central point of cornea (CP-TL), the maximum pachymetic progression index and the Db and D indexes (p < 0.000). The most suitable parameters for the KK progression monitoring in our study were the ISV, KI, IVA, Df, D, Dp, Db, BEThLo and Rmin. All these parameters showed a strong correlation rate (r> 0.6) according to Pearson's correlation coefficient. Statistically significant differences in the KK and PMD groups were found in the index of relative pachymetry, central pachymetry, CKI and Dp.