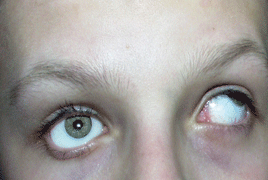 Published in Czech and Slovak Ophtalmology: 2015 - 1

Aim: The author refers about the plastic surgery technique of deepening the conjunctival sac in acquired anophthalmos without the orbital implant. The condition without the implant was caused primarily or secondarily after the enucleation or evisceration. The principal of the cul-de-sac technique is the fixation of the lower fornix conjunctiva to the orbital periosteum.

Material and methods: The modification of the original surgery technique applied by the author is from the nineties of the last century. It consists of the use of long-term resorbable suturing material for vascular sutures made from polydiaxonone (PDS 6-0) and the suture primarily fixated to the orbital periosteum. Only in the second phase, the tarsal and bulbar part of the conjunctiva of the lower fornix is fixated to the orbital rim. The result is the deepening of the conjunctival sac making possible better positioning of the eye prosthesis in the interpalpebral fissure from the cosmetic and functional point of view.

Results: The author presents the successfulness of this surgical technique in six patients operated on during the period from 2009 to 2014, presenting photographs of four of them in the child and adult age. Shallow of the lower fornix was caused by spontaneous elimination of the implant at the school age after the enucleation due to the inborn malformation of the eye globe in three years old boy. Extrusion of the implants occurred also in two young men after previous enucleation due to the malignant intraocular tumors in infant age. In these cases, the influence of the growth to the physiognomy of the conjunctival - palpebral area was evident. Among included adults were: Eighty-three years old female patient, twelve years after the enucleation without the implant due to the endophthalmitis of unknown etiology; 62 years old man after the evisceration of the eyeball at the age of seven years due to the endophthalmitis after the perforating injury; and 55 years old male patient five years after the enucleation of the eye globe with adjacent fat tissue removal without implant due to the malignant intraocular tumor with the suspicion of its extrascleral growth. Always,
the co-incidence of the involution process in the conjunctival sac itself took its part.

Conclusion: The surgical technique of deepening the conjunctival sac using the cul-de-sac method and using the suturing material made from polydiaxonone (PDS 6-0) may be applied in shallow anophthalmic conjunctival sac in the lower fornix. At the same time, with this method, the possible ectropion of the lower eyelid is treated as well. To prevent the occurrence of the conjunctival sac not suitable for the orbital prosthesis application, it should be used the orbital implant during enucleation or evisceration surgery.