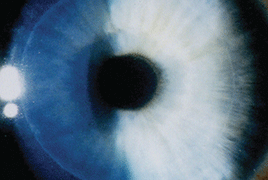 Published in Czech and Slovak Ophtalmology: 2016 - 2

Fourty-three patients (Group A) aged 3 to 7 years (mean, 5,6 years) with high myopic anisometropia and amblyopia had performed multizonal LASEK (27 eyes) or pIOL Verisyse implantation (16 eyes) on the more myopic eye in general anesthesia. Surgery was followed by patching of the dominant eye. Postoperative visual and refractive outcomes were analyzed and all children had minimally two years follow-up after procedure. Refractive surgical data were reported in standard format to describe safety, efficacy, predictability and stability of the procedure. This Group A of 43 children was compared with control Group B of 37 children (mean age 5,4 years), in whom myopic anisometropia and amblyopia were treated conventionally by contact lenses (CL) and patching of the dominant eye. Visual acuity (VA) and binocular vision (BV) outcome were analyzed and compared in both groups. The mean preoperative spherical equivalent (SE) cycloplegic refraction in Group A was - 9,45 ± 2,47 diopters (D) (range -6.0 to -18.25 D) and the mean postoperative SE -1,48 ± 1,13 D (range + 0,75 to – 2,25 D). The mean preop. decimal uncorrected visual acuity (UCVA) 0,023 ± 0,017 increased to 0,46 ± 0,18. The mean preop.decimal best-corrected visual acuity (BCVA) in Group A was 0,28 ± 0.22 and changed to 0,78± 0,19 by 2 years after surgery. The mean BCVA in Group B was 0,23 ± 0,19, at start of CL correction and amblyopia therapy, and improved to 0,42 ± 0,15 after two years. The mean BCVA at final examination was significantly better in Group A (P < 0,05). Binocular vision improvement expressed by the proportions of subjects gained fusion and stereopsis, was overall better in Group A (81 %) than in Group B (33 %), (P < 0,05). There were no complications after surgery. Refractive surgery in children, multizonal LASEK and pIOL Verisyse implantation, are effective and safe methods for correction of high myopic anisometropia, and has an important role in the treatment of amblyopia in children when contact lens intolerance. Visual acuity and binocular vision outcomes were better in children who received permanent surgical correction of anisometropia, than in children conventionally treated by contact lenses.