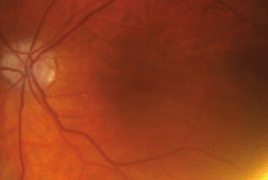 Optic Disc Drusen and their Complications

Published in Czech and Slovak Ophtalmology: 2016 - 1

The aim: of the study was to analyze the group of patients with optic disc drusen focusing on possible complications of this disease.

Material and methods: In our group of patients, we examined 46 eyes of 23 patients with the suspicion of optic disc drusen during the period from May 2013 until January 2014. In all adult patients, we examined the anterior and posterior segment of the eye biomicroscopically, established the visual acuity, measured the intraocular pressure, examined the visual field, performed the ultrasound examination of the eye (A and B-scan), analyzed the retinal nerve fiber layer (RNFL) by means of optic coherence tomography (OCT), and color and red-free photography. According to the biomicroscopical findings, the drusen were divided into invisible drusen (buried drusen) (verified by ultrasound only) – grade 0, visible delicate drusen – grade I, and multiple drusen (conglomerates) – grade II.

Results: Out of 23 patients, 14 were women and 9 were men. The age of the patients ranged from 8 to 82 years, the mean age was 44.4 years. In the group, there were 3 children (8, 11, and 13 years). In twenty-two patients, the drusen were present bilaterally, and one female patient had drusen on the right eye only. The grade of the drusen was set from 0 to II in all 45 eyes according to their amount, location, and visibility. As grade 0 were evaluated drusen in 11 patients; out of them, 10 patients had drusen bilaterally, and one female patient unilaterally. Out of these 11 patients, three were children. Grade I optic disc drusen bilaterally had nine patients, and three patients had drusen grade II bilaterally. In grade 0 drusen, no defect of the visual field was noticed. In drusen grade I, it was noticed the defect of the visual field in two patients (four eyes) out of nine patients, and in grade II the defect was present in two out of three patients (three eyes). The evaluation of the RNFL, by means of OCT, was performed among all three groups according to their grade 0 – II. In higher grades, the thickness of the RNFL was lower. Comparing to drusen grade 0, the drusen grade I, and II presented serious thinning of the RNFL superiorly. In three patients (drusen grade 0 and I) other complications of the optic disc drusen were observed. In one female patient with drusen grade I, there was decrease of the visual acuity due to the partial intravitreal hemorrhage in her left eye and parapapillary located retinal hemorrhages. In one male patient with drusen grade 0 was bilateral decrease of the VA due to cystoid macular edema caused by drusen. This patient had also retinal hemorrhages located near the papilla and partial intravitreal hemorrhage in his worse left eye. In one female patient with the drusen grade 0, the tortuous veins were noticed.

Conclusion: Drusen of the optic disc are present in 0.3 – 1.0 % of the population, and are bilateral in approximately 75 – 91 % of the cases. It is important to distinguish optic nerve disc drusen from the papiledema. Drusen of the optic nerve can cause severe defects of the visual field, decrease of the retinal nerve fiber layer, and may be accompanied by vessels complications. Patients with the optic disc drusen should regularly undergo ophthalmologic examinations focused on the intraocular pressure, visual field testing, and retinal fiber layer analysis. In patients with visual field defect and borderline values of intraocular pressure, the antiglaucomatic therapy is recommended.