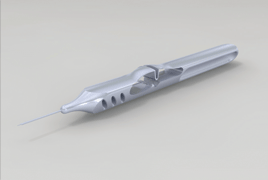 Use of EX-PRESS® implant in glaucoma surgery - retrospective study

Published in Czech and Slovak Ophtalmology: 2018 - 1

Purpose: The objective of the study is to evaluate of primary open-angle glaucoma (POAG) with the use of EX-PRESS drainage implant. Evaluated was the decrease of intraocular pressure (IOP), visus stabilization, perimeter Humphrey - related finding (T 30-2), Heidelberg Retina Tomograph (HRT) and possibility of reducing the local drug therapy.

Patients and methods: Retrospective data analysis was performed in 40 eyes with POAG in 28 subjects (14 female- and 14 male patients) average-aged 69.5 years. In all 40 eyes, surgery was performed by one surgeon within the years 2011-2017. Indications for EX-PRESS implantation in our study were the POAG with decompensated IOP, decompensated chronic secondary glaucoma or failure previously anti-glaucoma surgical operations. Within the preoperative period, in all cases the progression was observed on the perimeter T 30-2 or on the HRT. Before and after surgery, all 40 eyes were evaluated for the following factors: the IOP, visus, pachymetry, therapy by anti-glaucomatic drugs and regular inspections of the perimeter and HRT. The average post-surgery following-up time in our total of patients was 3 years and 8 months. The identified data of our total of patients were statistically processed using the Wilcoxon Signed-Rank Test.

Results: The average pre-surgery IOP was 21.4 mm Hg, 6 months post-surgery 11.2 mm Hg, and 13.2 mm Hg at the last inspection. Pre-surgery anti-glaucoma therapy: monotherapy in 2 eyes, dual therapy in 25 eyes, triple therapy in 13 eyes. Post-operatively without the need of therapy were 19 eyes, the need for monotherapy in 7 eyes, dual therapy in 13-eyes and triple therapy in 1 eye. During the last inspection of the perimeter or HRT within the postoperative period, we identified stationary finding in 39 eyes and only a mild progression in 1 eye. Peroperatively, we have not identified any serious complications. Within the postoperative period, we observed choroid ablation in 10 eyes as recovered within 6-7 days. As a more serious complication, we noted endophthalmitis in 1 eye on the background of generalized lichen planus complicating skin disease. In 5 eyes within the late postoperative period we found occlusion of lateral orifices in the EX-PRESS implant by the fibrotic tissue, the 4 eyes developed cataracts, and the eyeball hypotonia persists in 1 eye at the level of 5 torr without affecting the visus of the operated eye.

Conclusion: It outflows from the above results that the use of EX-PRESS implant in the surgery of glaucoma is an effective and safe method with a minimal number of complications.