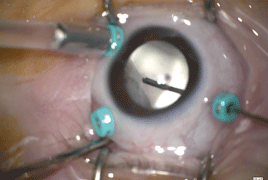 Pars plicata vitrectomy in premature newborns for retinal detachment as a result of retinopathy of prematurity, our results

Published in Czech and Slovak Ophtalmology: 2017 - 4

Introduction: The aim of this work is to evaluate our own results of surgical treatment of retinal detachment in immature newborns. Retinopathy of prematurity (ROP) is one of the most complicated ocular disorders, both in terms of diagnosis and therapy. It is a potentially blinding illness that arises from the incomplete development of the bloodstream of the neuroretina of preterm infants. Currently, the most effective therapy is ablation of the avascular retina by laser photocoagulation or cryocoagulation. Despite this treatment, the immature retina may develop it´s detachment.

Methodology: We report 2 case-reports, retrospective results of 4-eyes in 2 patients with severe ocular and overall complications of prematurity. The ocular background of preterm babies was investigated in arteficial mydriasis by an indirect ophthalmoscope, and later with the RetCam photographic device. The ROP stages were evaluated according to the ICROP classification. All eyes were treated with cryo-retinopexy at the threshold stage of ROP, followed by intraocular surgery for progression of traction retinal detachment. The surgical technique was a 3-port 25-G PPV (pars-plicata vitrectomy) with insertion of ports 1.5 mm from limbus. The PPV was performed using the Constellation (ALCON) operating unit, controlling the intraocular pressure for 15 torr. The assessment of visual acuity was performed according to the scale: no light perception (no response of the child to light), light sensitivity (positive or negative reaction to illumination), fixation of light.

Results: The retina stayed attached in all operated eyes, more in each case-report.