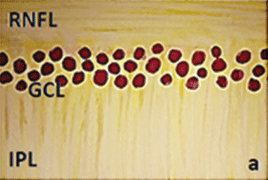 The aim of this study was to establish, if there exists the difference between Ganglion Cell Complex (GCL) and the Retinal Nerve Fiber Layer (RNFL) measurements in the same altitudinal half of the eye in hyper-tension (HTG) and normal-tension glaucomas (NTG).

Conclusion: The GCC and the RNFL examination values in the same altitudinal halves of the retinas did not establish statistically significant difference that would differ the patients with HTG from patients with NTG. Although, using the OCT, we did not confirm the differences in both diagnostic groups, it does not mean, that these differences do not exist and they may have several causes.