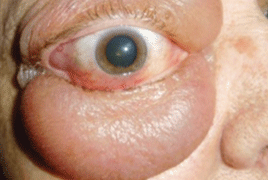 Treatment results in patients with lymphoma disease in the orbital region

Introduction: Lymphoma is a malignant disease that can affect several structures of the orbit and eye adnexa. In the area of orbit the non-Hodgkin‘s lymphoma (NHL) is typical, which may be indolent or aggressive. Indolent subtypes include MALT (mucosa-associated lymphoid tissue), follicular lymphoma (FL), lymphoplasmocytic lymphoma (LPL). Conversely, subtypes such as diffuse large cell lymphoma (DLBCL), mantle cell lymphoma (MCL) and Burkitt lymphoma (BL) are aggressive. The disease can be presented as primary or secondary malignancy of the orbit.

Material and methods: A group of 35 patients from the Department of Ophthalmology, Faculty of Medicine, Comenius University in Bratislava in the period from January 1 2009 to December 31 2016 with diagnosed non-Hodgkin‘s lymphoma located in the area of the orbit. For all patients, the generally valid diagnostic criteria for the NHL in the eye area were met. We processed the first signs of disease, the proportion of women and men with NHL, the percentage of NHL types in the orbit area. Statistically, we evaluated the age at which NHL occurred in patients and evaluated the incidence of the disease over the reference period. We have statistically processed the forms of the applied therapy, their adverse effects, the recurrence of the disease, the presence of other malignancies in the lymphoma patient.

Results: Of the total number of NHL patients in orbit region 13 (37%) were male and 22 (63%) female. The overall mean age at which lymphoma was diagnosed was 60 years. Median for the total age of patients was 61. In women, a slightly higher average age and median was found. On the other hand, lower values of both parameters were present in men. The modus of both sexes was the same, 70 years. We have seen various first symptoms in our group. We found that the most common symptom is red eye, and the rarest is the deterioration of the central visual acuity. The longest lasting symptom was swelling of eyelids (on average, up to 10 years) and the shortest described eye itching. Overall, the average duration of symptoms was 28 months, with a median of 13 months. In our group of patients were 3 % of LPL, 6 % of Burkitt’s lymphoma, 6 % of FL, 8 % of MCL, 17 % of DLBCL, and 60 % of malignant lymphoma. MALT lymphoma occurred in 62 % in orbital and 38 % in conjunctival localization. In 2 patients with MALT lymphoma of the conjunctiva to start with systemic therapy wasn't neccessary. In 21 patients with MALT lymphoma excisional biopsy or orbitotomy was the first step to diagnose lymphoma disease in 3 cases; in 18 patients the infiltration of the orbit or conjunctiva occured 1 to 3 years after primary diagnose of systemic lymphoma disease. In general, NHL localization was 29 % in conjunctiva and 71 % in the orbital area. In 9 % of the orbital lymphoma, we observed lymphoma ingrowth to the conjunctiva. Systemic therapy was initiated in patients in II. stage and higher stage of the disease according to the Ann Arbor system. Totally 63 % of the group were treated by systemic therapy. Recurrence occurred in 5 patients, representing 14 % of the observed, but only in one patient with MALT lymphoma. Preoperative and postoperative (excisional biopsy, orbitotomy) central visual acuity (CVA) stayed unchanged, postoperative swelling did not affect CVA, and CVA didn't change even
during long-term follow-up.

Conclusion: Careful differential diagnosis determines the therapy of the disease, since the primary symptoms are usually nonspecific for ocular lymphoma. Significant factors for therapy include tumor grading and clinical staging by AJCC 2009 (American Joint Committee on Cancer, Chicago, Illinois). Correct evaluation of the symptoms is an important step to indicate excisional biopsy or orbitotomy: After histopathological results we can start adequate therapy in the cooperation with oncohematologist.