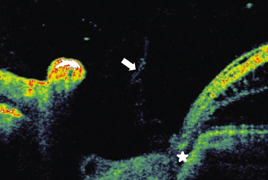 Methods: Six eyes of 6 patients (3 females, 3 males) were included in a retrospective study. We excluded patients with ODP without maculopathy. Patients were followed in years 2008-2017. Mean age at the first examination was 40,3 years (15-70 years). Duration of worsening of the best corrected visual acuity (BCVA) ranged from 2 days to few years. In all patients we performed BCVA test at Early Treatment of Diabetic Retinopathy Study (ETDRS) optotype, examination of anterior and posterior segment and photo documentation of fundus. Optic disc, parapapillary region and macula were examined by optic coherence tomography (OCT). Four patients underwent 23-Ga PPV with active detachment of posterior hyaloid membrane and tamponade with perfluoropropan (16% C3F8). In 2 patients a sample of tissue from ODP was taken during PPV to histological examination.

Results: Mean BCVA at the first examination was 0,10 (ranging from 0,05 to 0,16). OCT findings proved macular schisis in outer retinal layers (RSE) in 2 eyes, in 1 of these eyes with additional presence of subretinal fluid. In 4 patients macular schisis in outer as well as inner retinal layers (RSI) was present, in 2 of them with additional subretinal fluid. In 5 eyes glial tissue and/or vitreous condensation was present in ODP. Four eyes with RSE and RSI improved both anatomically as well as functionally after vitrectomy. In 1 patient with previous communication between ODP and RSE this was closed after vitrectomy. Mean pre-operative BCVA was 0,11 (ranging from 0,05 to 0,16), mean final BVCA was 0,5 (ranging from 0,25 to 0,63), mean visual gain was +30 letters (ranging from +10 to +45). Mean follow-up after PPV was 59 months (36–96).

Conclusion: Spectral OCT shows variability of morphological findings in patient with ODP associated with maculopathy. Traction of glial tissue and/or condensed vitreous in ODP together with adherent posterior vitreous membrane could be one of the factors causing macular retinoschisis and/or secondary serous macular detachment. Complete separation of vitreous from optic nerve head during the vitrectomy is an efficient treatment resulting in macular reattachment and improvement in visual functions.