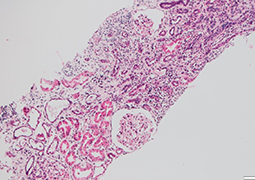 Published in Czech and Slovak Ophtalmology: 2022 - 6

In this case report, we describe the case of a 50-year-old woman referred by her general practitioner to a pulmonologist in order to investigate persistent fever and elevation of C-reactive protein despite antibiotic treatment following a respiratory infection. The patient was examined extensively, during which rheumatology, gastroenterology, nephrology, ophthalmology, laboratory and imaging tests were performed. Due to a rapid progression of renal insufficiency with active urinary sediment, the patient was referred for a renal biopsy, which confirmed tubulointerstitial nephritis, followed by a diagnosis of bilateral anterior uveitis two months later - genetic testing was also conducted, which confirmed the diagnosis of tubulointerstitial nephritis with uveitis syndrome. Steroid treatment brought about a gradual reduction of proteinuria and a stabilisation of renal function.