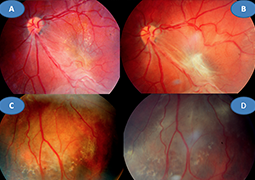 Atypical Forms of Ocular Toxoplasmosis in Childhood. A Case Report

Aim: To present an outline of acquired atypical forms of ocular toxoplasmosis (OT) in childhood, with reference to the 100th anniversary of the discovery of this etiology by Professor Janků from Czechoslovakia, who was first to describe the clinical congenital picture of OT characterised by macular scar.

Material and Methods: Symptoms of intraocular bilateral neuritis appeared in a 6-year-old girl, with visual acuity (VA) bilaterally 0.1. Toxoplasmic etiology was demonstrated in laboratory tests, and the patient was immunocompetent. Following treatment with macrolide antibiotic and parabulbar application of corticosteroid, the condition was normalised stably at VA 1.0 in both eyes. Bilateral retinal vasculitis was determined in an 8-year-old boy, with VA of 0.25 in the right eye and 0.25 in the left, with a medical history of strabismus detected after suffering from varicella. The examination for toxoplasmosis was negative, but pronounced general hypogammaglobulinaemia classes IgG, IgM and IgA was detected. Immunosuppressive and immunomodulatory therapy did not produce the desired effect, and the condition progressed to retinochoroiditis. Due to blindness and dolorous glaucoma, enucleation of the right eye was performed at the age of 15 years. Histologically toxoplasmic cysts with bradyzoites were detected, a subsequent laboratory test demonstrated toxoplasmic etiology upon a background of persistent regressing hypogammaglobulinaemia. General anti-toxoplasma and subsequent immunosuppressive treatment did not produce the desired effect, and at the age of 22 years the patient lost his sight also in the left eye.

Conclusion: Atypical form of OT intraocular neuritis in an immunocompetent patient had a favourable course, whereas retinal vasculitis with retinochoroiditis in a temporarily immunocompromised patient ended in bilateral blindness.