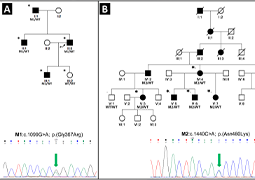 Primary Open-Angle Glaucoma due to Mutations in the MYOC Gene

Aim: Mutations in the myocilin gene (MYOC) cause trabecular dysfunction and thus are involved in the pathogenesis of primary open-angle glaucoma (POAG). The aim of this study was to characterize and describe the clinical findings in two Czech families with POAG due to pathogenic variants in the MYOC gene.

Material and methods: Members of the two families affected by POAG underwent complete ophthalmological examination. In the proband from the first family, a direct sequencing of the three most frequent mutations in the MYOC gene was performed, and in the proband from the second family, an exome sequencing was performed. Other family members underwent targeted tests using direct sequencing.

Results: In total, 10 individuals diagnosed with POAG aged 20–70 years (mean 32.2 years, SD ±10.9 years) were examined. Eight of them showed advanced glaucomatous neuropathy with severe changes in the retinal nerve fiber layer. Clinical signs of POAG were present in six individuals in the third decade of life already; another four developed POAG during the fourth decade of life. Eight out of 10 patients had to undergo filtration surgery. Surgery was performed within 1 to 7 years of diagnosis, but mostly was performed within 2 years of glaucoma diagnosis. In the first family, MYOC variant c.1099G>A p.(Gly367Arg) was shown in the affected family members; in the second family MYOC variant c.1440C>A p.(Asn480Lys), both in heterozygous state. The changes were assessed as pathogenic.

Conclusion: Our study is the first to describe mutations in the MYOC gene causing POAG in Czech patients. Genetic testing may be recommended for this diagnosis, especially in individuals with early presentation and a positive family history. Carriers of pathogenic variants of the MYOC gene have a lifetime risk of developing POAG of more than 50% and the course of their disease is often more aggressive, requiring surgical intervention to permanently control the intraocular pressure.