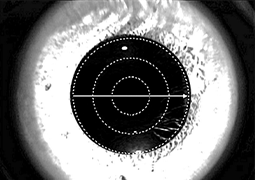 Aims: The aim of the study was to analyse the values of the anteroposterior corneal optical power ratio (AP ratio), to compare the resulting values with those theoretical models of the eye, and to define the effect of using an individual ratio value on the approximation of the total corneal power.

Material and Methods: A total of 406 eyes were included. Each patient underwent an OCT (RTVue XR) examination, according to which the AP ratio of the cornea was determined, as well as the biometric parameters of the eye (Lenstar LS900). The correlation between the biometric parameters of the eye and the individual AP ratio values were evaluated using Pearson’s correlation coefficient. In the analysis, the AP ratio results were compared with selected schematic models of the eye. Using Gaussian equations, a theoretical calculation of the total corneal optical power (KG) was performed, by fitting the AP ratio value and comparing it with the actually measured total corneal power (TCP).

Results: The mean value of the individually determined AP ratio was 1.17 ±0.02. The most frequently represented interval (33.74 %) was 1.17 to 1.18 AP ratio values, with the vast majority of eyes (79.56 %) in the range of 1.15 to 1.20. Individual values of total corneal optical power were statistically significantly different (p < 0.05) from the theoretical values of TCP (except in the Liu-Brennan eye model, where p = 0.06). The lowest mean difference of values was found for the Navarro schematic model. The dependence of the measured AP ratio values and biometric parameters reached a moderate negative correlation (r = -0.50 for p < 0.05) with the parameter corneal posterior surface curvature (Rp), as well as a weak negative correlation with limbal diameter WtW (r = -0.26 for p < 0.05) and a weak positive correlation with central corneal thickness CCT (r = 0.17 for p < 0.05).

Conclusion: The assumption of a constant value of the AP ratio according to the selected schematic models of the eye is statistically significantly different from the actual measured values and was defined to have only a negative weak correlation with the size of the limbus diameter. Using the resulting average value of the determined AP ratio (1.17 ±0.02), a lower difference between real and calculated total corneal optical power was achieved.