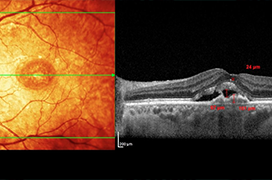 Published in Czech and Slovak Ophtalmology: 2022 - 4

Purpose: The aim of the study was to compare the effect of three initial doses of the anti-VEGF ranibizumab and aflibercept medication on serous pigment epithelial detachment (PED), subretinal fluid (SRF) and intraretinal fluid (IRF) in the macula of treatment naive neovascular AMD (nvAMD) patients.

Material and Methods: The cohort consists of 148 patients, of which 74 patients were treated with ranibizumab (51 females and 23 males) and 74 with aflibercept (46 females and 28 males). The data was recorded prospectively from the moment of diagnosis and start of treatment for a period of 3 months. At the moment of diagnosis and 3 months later, an OCT examination (Spectralis OCT, Heidelberg Engineering, Heidelberg, Germany) was performed. The OCT examination included a macular scan with 25 scans. Using the OCT instrument software, we measured the maximum anterior-posterior elevation of serous PED, the highest thickness of SRF and the largest diameter of the intraretinal cystic space. The statistical significance of differences between groups was evaluated using the t-test for continuous data and the Fisher exact test for categorical data. Changes in values of continuous variables over time were evaluated using the Wilcoxon paired test. Paired comparisons of binary parameters were determined by the McNemar test.

Conclusion: We are convinced that ranibizumab and aflibercept have the same effect on serous PED, SRF and IRF in the macula in patients with treatment naive nvAMD during the initial loading phase.