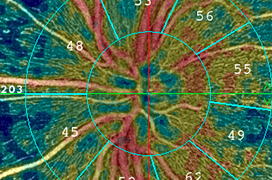 Published in Czech and Slovak Ophtalmology: 2021 - 6

Aim: The aim of the study was to determine whether hypertensive glaucoma (HTG) with different types of treatment leads to significant damage in any of the evaluated parameters.

Sample and methodology: The sample, consisting of 36 HTG patients (72 eyes), was divided into three subgroups: In the first group, patients were treated with combination therapy (latanoprost + timolol, latanoprost + dorzolamide + timolol, dorzolamide + timolol). The group consisted of seven women and five men, with an average age of 64 years (49-81). In the second group, patients were treated with beta-blockers (carteolol, betaxolol, timolol). The group consisted of five women and five men, with an average age of 62 years (27-77). In the third group, patients were treated with prostaglandins (latanoprost, bimatoprost). The group consisted of eleven women and three men, with an
average age of 61 years (61-78). Criteria for inclusion in the study were visual acuity of 1.0 with a possible correction of less than ±3 dioptres, approximately the same changes in the visual fields of all patients, an intraocular pressure (IOP) of less than 18 mmHg, and no other ocular or neurological disease. The retinal nerve fibre layer (RNFL) on the optic nerve target and vessel density (VD) was measured using an Avanti RTVue XR from Optovue. We determined the values of VD in whole image (WI) and VD of peripapillary (PP). In both cases, we then measured all vessels (VDa) and small vessels (VDs). The visual field was examined by means of a fast threshold glaucoma program with a Medmont M 700 instrument. In addition to the sum of sensitivities in apostilbs (asb) in the range of 0-22 degrees, the overall visual field defect (OD) was also evaluated. The statistical analysis was carried out using a multivariate regression model with adjustment for age and gender. The measured values of the third group were taken as
baseline.