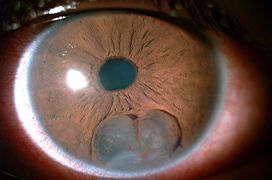 Spontaneous Regression of a Primary Iris Stromal Cyst in a Patient With Keratoconus. A Case Report

Published in Czech and Slovak Ophtalmology: 2021 - 5

Purpose: To report the rare case of a 29-year-old male with a history of keratoconus, who presented with a primary iris stromal cyst which eventually showed spontaneous regression.

Methods: Description of the clinical findings in the case of a 29-year-old male with a prior history of keratoconus, but no eye surgery or trauma, who consulted for an iris cyst in the left eye, diagnosed 9 months earlier.

Case report: Slit-lamp examination revealed mild dyscoria, and a large cyst in the inferior quadrant of the iris. Ultrasound biomicroscopy and anterior segment optical coherence tomography of the left eye confirmed the presence of a giant iris cyst with thin walls, in contact with the corneal endothelium. Corneal endothelial cell density in the inferior cornea (close to the cyst) was 1805 cells/mm2 and 2066 cells/mm2 in the central area.  After considering the risk of anterior chamber epithelial downgrowth following any surgical procedure of the cyst, the patient received conservative management. In the following months, the patient presented with 3 episodes of anterior uveitis, managed with topical corticosteroids. Finally, at approx. 21 months after the initial diagnosis, the cyst presented spontaneous regression. Anterior segment optical coherence tomography confirmed the absence of fluid inside the cyst remnants and the final endothelial cell densities evidenced endothelial cell loss (inferior cornea 738 cells/mm2 and central cornea 1605 cells/mm2).

Conclusion: Conservative management should be considered in patients with cysts that show slow progression and are distant from the visual axis, in order to minimise the risk of complications following any surgical procedure of the cyst. In addition, the present case is one of the few of primary stromal iris cysts with spontaneous regression reported in the literature.