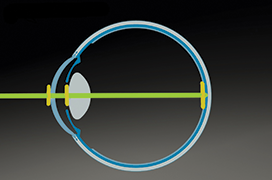 Published in Czech and Slovak Ophtalmology: 2021 - 4

Methods: 40 eyes of patients indicated for cataract surgery were included in this study. Each patient was examined by optical biometer firstly without artificial mydriasis (AM) and then after AM, which was achieved using local application of short-term acting mydriatics. Biometric data were measured by Lenstar LS 900 optical biometer, we recorded axial length of the eye (AL), central corneal thickness (CCT), anterior chamber depth (ACD), lens thickness (LT) and corneal astigmatism and optical power of cornea. These data we measured were used for calculation of the PC IOL optical power using both the SRK/T and the Haigis formula. The target postoperative refraction was set to emmetropia. Statistical analysis was performed for evaluation of influence of AM on each ocular parameter and influence of AM on the recommended PC IOL power calculated by the SRK/T and the Haigis formula.

Results: No statistically significant effect of AM on AL, LT and keratometry was demonstrated. On the contrary we demonstrated significant effect on CCT and ACD. No effect of AM on the PC IOL power calculation using the SRK/T formula was proved – the PC IOL optical power before AM and after AM did not differ in any case. When using the Haigis formula for the PC IOL power calculation, the recommended optical power of the PC IOL changed by +0.5 Dpt in 9 eyes, i.e., 22.5 % of the whole group, but statistical analysis did not show this change as statistically significant.