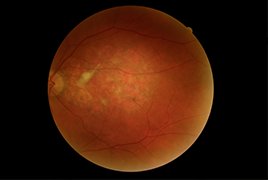 Brolucizumab – A New Player In The Field Of Anti-Vegf Therapy Of Neovascular Age-Related Macular Degeneration. A Review

Vascular endothelial growth factor (VEGF) has been identified as a major promoter of the development of choroidal neovascularization in age-related macular degeneration. The development of choroidal neovascularization can be slowed by preventing the binding of vascular endothelial growth factor to cellular VEGF receptor-2 present on vascular endothelial cells, which represents the major proangiogenic stimulus. Advances in the development of anti-VEGF therapy have led to significant improvement in visual acuity outcomes in recent years that neovascular age-related macular degeneration can no longer be considered an incurable disease. Despite its many advantages, the current standard of care, which is the frequent application of VEGF blockers to the vitreous, is a significant burden on both the patient and the healthcare system.
This review is aim on a new brolucizumab molecule (also known as RTH 258 or formerly ESBA 1008). The article focuses on the molecular aspects of the drug and an overview of the basic preclinical and clinical studies that were performed during drug development. Brolucizumab is a single chain fragment of a humanized monoclonal antibody with a molecular weight of 26 kDa that inhibits VEGF-A. Preclinical animal studies have shown good penetration of the molecule through the retina with minimal systemic exposure. The SEE study (phase 1/2) demonstrated safety and tolerability after drug administration. The OSPREY (phase 2) study demonstrated the same efficacy of brolucizumab on visual acuity in the 8-week dosing regimen compared to aflibercept. In the same study, patients were also pilot tested in a 12-week dosing regimen. The HAWK and HARRIER studies (phase 3) demonstrated the efficacy of the drug at a dose of 6 mg in a 12-week dosing schedule in 55.6 % and 51 % of patients, respectively.