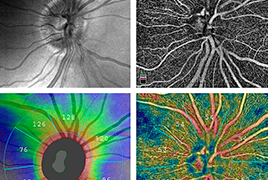 Published in Czech and Slovak Ophtalmology: 2021 - 3

Aims: The main aim of this work was to find out if there is a correlation between vessel density (VD) and results of measured perfusion values in ophthalmic artery and in central retinal artery of the same eye in a group with hypertension glaucoma (HTG).

Materials and methods: The file included 20 patients with HTG, thereof 13 women of average age 68.7 years (49–80 years) and 7 men of average age 58.4 years (27–81 years). Criteria for inclusion in the study: visual acuity 1,0 with possible correction less than ±3 diopters, approximately the same changes in visual fields in every patient, intraocular pressure (IOP) less than 18 mmHg, no other ocular or neurological diseases. VD was measured by Avanti RTVue XR by Optovue firm, perfusion parameters were measured using Doppler ultrasound with Affinity 70G machine by Philips firm. The peak systolic velocity (PSV) and end diastolic velocity (EDV) and resistance index (RI) were measured both in ophthalmic artery (AO) and in central retinal artery (CRA). Visual field (VF) was examined by quick threshold glaucoma program by Medmont M 700 machine. The sum of sensitivities in apostilbs (abs) was evaluated in the range 0–22 degrees of visual field. The results of sensitivities in visual field were compared to VD and perfusion parameters in CRA and AO of the same eye.

Results: Pearson’s correlation coefficient (p = 0,05) was used to assess the dependency between chosen parameters. By comparing VF and VD from measured areas, strong correlation (r = 0.64, resp. 0.65) was revealed. It was then proved that VD (WI-VDs) correlates with RICRA weakly (r = -0.35) and moderately strongly (WI-VDa r = -0.4, PP-VDs r = -0.43 and PP-VDa r = -0.45). This means that with increasing resistance index in CRA the density in VD decreases. The other correlations between VD and perfusion parameters (PSV and EDV) in CRA and AO were not significant.

Conclusion: Measured values showed that the vascular component of VD has a huge impact on the changes in visual fields in HTG. Weak to moderate influence exists between VD and RI in CRA. OCTA has proven to be more suitable than Doppler ultrasound for determining the condition of blood circulation in the eye.