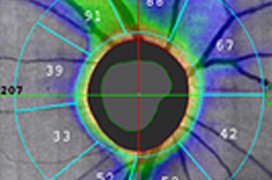 Published in Czech and Slovak Ophtalmology: 2020 - 6

Aim: The aim of the study was to determine the morphological and functional findings in a patient after methanol poisoning.

Results: The biggest changes were found in RNFL and VD. PERG also showed damage to retinal ganglion cell axons. In left eye we determined decrease in oscillations (in comparison with contralateral eye) at N35-P50 and P50-N95. VEPs in both eyes were significantly reduced, almost inconspicuous in the left eye. Extension of latency time of P100 was not identified. Functional MRI showed a bilateral decrease in voxel activity with a greater decrease in the left eye. There were postmalatical changes in the dorsal parts of the putamen on MRI. The width of the optic nerve and chiasm was physiological.

Conclusion: Asymmetric damaging of RNFL and cortical centres of the brain were determined. We registered large pathological changes in VD, which are probably responsible for the deepening of optic nerve excavation and further loss of nerve fibers of retinal ganglion cells, which have not yet been described in the literature. Following these results is possible to define direct damage of nerve structures and blood vessels by toxins of methanol metabolism in the acute stage and upcoming reparation processes in following periods.