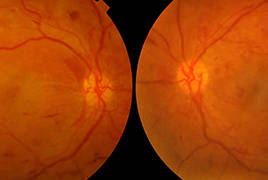 Published in Czech and Slovak Ophtalmology: 2020 - 4

Pregnancy is associated with increased risk of progression of diabetic retinopathy (DR), the greatest risk of worsening occurs during the second trimester of pregnancy and persists as long as one year after the childbirth. The risk factors include duration of the diabetes, insufficient metabolic control, severity of DR at the time of conception and presence of coexisting vascular disease, such as arterial hypertension, and pregnancy itself. The recommendations for retinopathy screening in pregnancy vary significantly. A dilated fundus exam should be done in the beginning of pregnancy, the next follow-up throughout pregnancy depends on the severity of ocular findings. The cooperation of multi-disciplinary team consisting of ophthalmologist, obstetrition and endocrinologist is essential to provide the best health care.
The authors present a case report of a pregnant woman with type 1 diabetes mellitus (DM), who had a progression of DR and diabetic macular edema (DME) in both eyes during pregnancy. She has had DM for 24 years and has been treated with insulin. The patient was examined at the 23rd week of the second pregnancy (first pregnancy was terminated because of missed miscarriage). The diagnosis of advanced proliferative DR and advanced DME in both eyes was made so we performed panretinal laser photocoagulation of the retina of both eyes. Despite that the ocular findings got worse and we found vitreous haemorrhage in the left eye. We performed pars plana vitrectomy (PPV) of the left eye at the 28th week of pregnancy, nevertheless the DME got worse in both eyes, so we recommended to terminate the pregnancy at the 31st week because of the risk of loss of vision. The visual acuity of the left eye improved, but suddenly there was vitreous haemorrhage in the right eye after the delivery. We indicated PPV of the right eye, the outcome of the surgery was satisfying. We still take care about this patient.