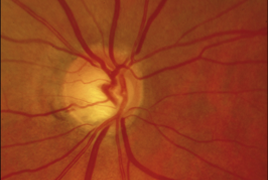 Published in Czech and Slovak Ophtalmology: 2020 - 2

Aim: To ascertain whether various therapeutic procedures in non-arteritic anterior ischaemic optic neuropathy (NAION) have an impact on the resulting visual acuity of the affected eye. To assess the prevalence of risk factors that accompany this disease according to the literature.

Methods: The retrospective study enrolled 55 eyes of 53 patients (41 men, 12 women) with an age range of 46 to 85 years (mean 64.9; median 64.0) who were hospitalized at the Department of Ophthalmology of the Faculty of Medicine and Dentistry and the University Hospital in Olomouc with the diagnosis of NAION between 2005 and 2016, and who received systemic treatment with intravenous vasodilators, either alone or in combination with intravenous corticosteroids. Central visual acuity (CVA) prior to treatment and immediately after its termination was evaluated. CVA was measured using the Snellen chart and is presented in decimal values. Using medical history data and medical records, the presence of systemic disease, namely hypertension, type 2 diabetes mellitus, and hypercholesterolaemia, was studied in these patients and evaluated for a possible association with NAION.

Results: In the group of patients who were treated with intravenous vasodilators, the resulting CVA improved by 0.083 on average. In the group of patients who, in addition to vasodilator therapy, also received treatment with corticosteroids, the resulting CVA improved by only 0.03 on average. Although there was a more prominent improvement in CVA in the group treated with intravenous vasodilators alone, this difference was not statistically significant. At least one risk factor was found in the vast majority of the patients (96%). Eighty percent of the patients had hypertension, 43.6% of them were treated for diabetes mellitus, and 72.7% of the patients took drugs for hypercholesterolaemia. A combination of all these conditions was found in 36.4% of the patients. The proportion of smokers and past smokers did not exceed that of non-smokers.

Conclusion: The mean improvement in the resulting CVA in patients after systemic therapy with vasodilators alone was greater than in those treated with a combination of vasodilators and corticosteroids; however, this difference was not statistically significant. In most patients in the group, at least one systemic risk factor was noted, most frequently hypertension. The prevalence rate of systemic risk factors was comparable to that reported in the literature.