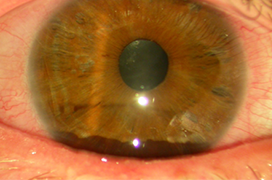 Long-term Observation of Patients with Sympathetic Ophthalmia from a Diagnostic and Therapeutic Perspective. Overview of Literature

Aim: To evaluate options of diagnostic and therapeutic procedures of sympathetic ophthalmia (SO) compared with literature data. Backgroud: SO is an ocular autoimmune disease. It is characterized by disbalance in the imunoregulatory T-subsets within cell mediated immune response.

Methods: File examination of SO by evaluation humoral and cellular immunity was ranked nukleolar test (NT). It evaulates the current status of lymphocyte activation based on the nucleolar morphology and RNA transcription aktivity. The classical histological examination was supported by immunohistochemical analysis of lymphocytic subpopulations in the eyeball enucleated for. SO in one case.

Material: Five boys and men overall were monitored and treated in two studies from 1979 to 1994 and from 1999 to 2017 with SO In four cases it was subsequent after penetrating injuries and once after lensectomy with vitrectomy. The age of patients in the time of onset of SO was between 4 and 24 years (average 12 years). The time interval between insult and onset of SO varied between 10 days and 3 months (average 1.7 months). The relaps of disease appeared in the all cases in the time interval from 3 months to 38 years (average 15 years). Another two patients with SO were examined only in consultation: 16 years old boy with relaps of SO after cataract extraction and 71 years old women with SO subsequent after lensectomy and vitrectomy. There was examined and compared group of 19 patients with other types of uveitis in the same time. The lens-associated uveitis were caused after ocular contusion and penetrating eye injury in 16 patients (13 male patients). In another three cases (young women) with uveitid
underlined by II. or III. type of hypersenzitivity the enucleation of dolorous eyeball calmed down the secondary uveitis on their second eye without any change of immunosupressive treatment and without change in NT.

Results: There were changes in the complex immunological laboratory tests results in the SO cases in the counts of activated lymphocytes in the peripheral blood. The count of activated lymphocytes was increased in SO cases unlike in lens-associated uveitis. There was detected in NT statistically significant difference (p = 0,0134) between the two groups of uveitis. The histological examination (5 eyes with SO and 7 eyes without sympathetic uveitis) confirmed the diagnoses, supporting basically the clinical diagnosis. The immunohistochemical examination corfirmed the presence of populations of T-lymphocytes, macrophages and also B-lymphocytes. A basis of immunosuppressive therapy was the combination of prednisone and azathioprin at the first time. Effective therapy featured cyklosporine later.

Conclusion: The nucleolar test of lymphocytes draws attention of their up-to-day increased activity without the diferentiation of subpopulations and their absolute number increase related to the current activation of type IV. hypersensitivity (cell-mediated) in uveitis mechanism. The immunosupressive therapy calmes down this activation predominantly in SO, but also in other case sof uveitis with different types of hypersensivity. The immunohistochemical examination illustrates different presence of
lymphocytic types according to the stage of SO.