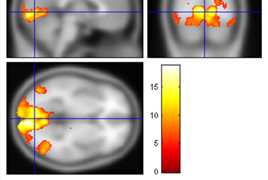 Published in Czech and Slovak Ophtalmology: 2019 - 2

The study provides an up-to-date overview of pathogenesis, functional and structural changes in normal tension glaucoma (NTG) and its differences from high tension glaucomas (HTG).

The authors point to less known facts which make both diagnostic groups different. First of all, there are electrophysiological findings that verify pathology in the complete visual pathway in HTG in contrast to NTG where the retinal ganglion cell response is relatively normal but the abnormalities are in the visual pathway. This corresponds to the findings of functional magnetic resonance imaging of the brain with a significant decrease in activity in HTG compared to NTG. We found a higher decrease in activity in HTG following application of the colour paradigm compared to NTG where we did not see a similar difference. We also investigated the central corneal thickness (CCT) in both diagnostic groups. We did not find a statistically significant difference. However, we found the effect of CCT on progression of the changes in visual fields in HTG. In relation to suspicion of abnormally low cerebrospinal pressure and a possible cerebrovascular fluid flow disturbance in NTG, we examined the optic nerve thickness (OND) and optic nerve sheath diameter (OSD) at a distance of 4, 8, 16 and 20mm from the posterior pole of the eye. In the comparison with the healthy population, we did not find any abnormalities except for the width of the optic chiasma that was markedly lower in NTG. In relation to a possible impairment of cerebral perfusion we determined the degrees of cerebral atrophy using magnetic resonance imaging by measuring the bicaudate ratio (BCR) and white matter lesions using the Fazekas scale. We did not find a difference between HTG and NTG in BCR. We found statistically significant changes in BCR which correlated with the changes in visual fields. The higher values of the pattern defect were associated with increased brain atrophy (BCR). We did not detect similar relations in the Fazekas scale. We found a significant difference in this parameter among NTG, HTG and a control group. We found the most advanced changes in the patients with HTG.

Conclusion: In HTG, impairment of retinal ganglion cells and subsequently also their axons, including visual cortex occurs because of a high intraocular pressure. In NTG, the retinal ganglion cells are relatively normal like the visual cortex, but alteration occurs in their axons. The cause is not a high intraocular pressure but most probably ischemia.