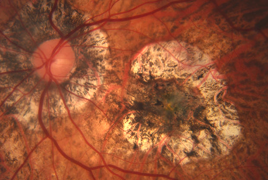 Treatment of Idiopathic Choroidal Neovascular Membrane with Ranibizumab - Our Experience

Objective: To evaluate the anatomical and functional outcome of ranibizumab therapy in patients with idiopathic choroidal neovascularization (CNV).

Results: On average, we observed the gain of +11 letters on the ETDRS visual acuity chart after 12 months of the follow-up period. On average we observed reduction of central macular thickness -233μm. At the 12th month of follow-up we observed in all patients of our group only inactive scar without exudation. No serous retinal pigment eithelium detachment, subretinal fluid or intraretinal cysts were observed. Only 3 injections of ranibizumab were administered on average to each patient during the 12 months of the follow-up period.

Conclusion: In our study, we observed the positive effect of ranibizumab on the course of idiopathic CNV. With ranibizumab treatment we achieved regression of CNV with resorption of macular edema in all patients of our group. With the disappearance of the activity of idiopathic CNV ranibizumab gives real hope to improve visual acuity.