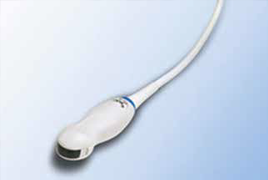 Background: Shear wave elastography (SWE) is an imaging modality using advantage of ultrasound to detect differences of elastic properties (mechanical rigidity) of tissues. SWE increasingly develops across medical specialities and is already used in hematology, urology and oncology. In the field of ophthalmology using SWE to evaluate corneal mechanical properties, peripapillary biomechanical qualities in glaucoma patients several papers were published Also SWE ultrasound mechanical specificity safety studies were published. Aim of this work is to review SWE technique and its potentional using during examination in patients with endocrine orbitopathy (EO). In practical part of this work is evaluated the elasticity of oculomotor rectus muscles in healthy population, in patients with EO in early stage of disease (oculomotor muscles oedema) and in patients with EO in terminal stage of this disease (oculomotor muscles fibrosis) is determinate. Also possibility of using SWE (in comparison with standard ultrasound examination) for measuring thickness of oculomotor muscles is evaluated.

Methods: There were 60 eyes in 30 patients with EO examined and the elasticity of oculomotor muscles was determined. Results were compared with values of elasticity in 40 eyes in healthy population of 20 people. All measurements were performed with ultrasonic system Aixplorer of SuperSonic manufacturer in standardized terms and been undertaken by the same performer. Each value was measured several times to reduce measurement errors.

Conclusion: This work result shows SWE as an EO diagnostic possibility. Elasticity of oculomotor muscles correlates with stages of the disease. Higher elasticity in oedema stage and higher stiffness in fibrosis stage. By involving and including into diagnostic algorithm, SWE could help with EO patient’s examination, offer chance to confirm more accurately the diagnosis and in some cases might even replace magnetic resonance (MRI), which is more expensive and time consuming method.