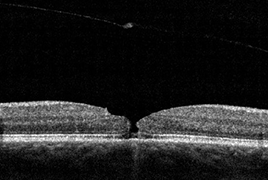 Published in Czech and Slovak Ophtalmology: 2018 - 6

Macular hole (MH) was considered untreatable condition for a long time until Kelly and Wendel described the posibility of surgical treatment with pars plana vitrectomy (PPV) in the nineties of the twentieth century. Since then have both surgical instruments and operation techniques developed rapidly and PPV has become the mainstay of MH therapy. Only stage I according to Gass classification which equates vitreomacular traction (VMT) according to Vitreomacular Traction Study group classification is routinely treated conservatively with observation only. It is however necessary to assess each case individually as some small and favourable MHs may close spontaneously.
Here we present a case report of 59 years old woman with mild myopia and best corrected visual acuity (BCVA) 6/6 bilaterally. She presented on July 2017 with blurry vision in her right eye and was diagnosed with bilateral VMT according to optical coherence tomography. BCVA was 6/9 in her right eye and 6/6 in her left eye. During five weeks a full thickness MH developed in left eye that was accompanied by a decrease in BCVA to 6/12p. Considering favourable size and configuration of MH and the fact that the patient preferred conservative approach, we postponed the surgery, observed the MH and recommended bed rest. The MH closed spontaneously during five weeks with resulting BCVA 6/6. In her right eye the VMT released during four months with resulting BCVA 6/6 as well.
The authors of the study declare that the formation and theme of the professional report and its publication are not in conflict of interest or supported by any pharmaceutical company.