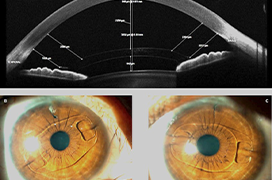 Methodology: Data collection was obtained from an existing database with information on patients with a phakic Artisan lens implant between 1998 and 2011 at the Virgilio Galvis Ophthalmology Centre, with at least 5 years of follow-up. As a second stage, an analysis was carried out to identify the change in endothelial cell density and its potential associated factors.

Results: A total of 80 eyes with myopic errors were included with a follow-up of 11.9 + 3.48 years. The percentage of total loss of endothelial cells was greater than 25% of the preoperative density in 43.8% of the eyes. A postoperative annual loss > 1.6% was found in 47.0% of the eyes with that information available. 41 eyes (51%) had final endothelial density < 2000 cells/mm2, and 7 (8.8%) eyes had endothelial cell density < 1000 cells/mm2. Among the variables studied, no associated factors for long-term endothelial loss were found. During the course of the study, 8 (10%) phakic intraocular lenses were explanted, including 3 with accelerated endothelial loss, and another 2 with cataract associated and a significantly low endothelial density. The last mean spherical equivalent was -0.81 (±1.01 D), and the final uncorrected distance visual acuity was 0.45 logMar (Snellen 20/56).

Conclusion: Artisan-type phakic lenses are a good alternative for the correction of high myopic defects, with predictable refractive results in the long term. However, there is an increased loss of endothelial cells in the long term in a high percentage of patients. Strict postoperative follow-up, including endothelial evaluation, is required, and further studies are warranted.