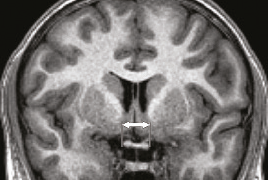 Purpose: The aim of our study was to find out whether in patients with hypertensive glaucoma (HTG) and normotensive glaucoma (NTG), there is a change in the size of the chiasm depending on the changes in the visual field. Therefore, we retrospectively measured the width of the chiasm in the patients to whom we measured the size of the corpus geniculatum laterale in 2013.

Materials and methods: The group consisted of two groups of patients. Nine with hypertensive glaucoma (HTG) and nine with normotensive glaucoma (NTG). The diagnosis was based on a complex ophthalmological examination and in NTG and electrophysiological examination. The visual field was examined by a rapid threshold program on the Medmont M700. The sum of the sensitivity from both visual fields in the range of 0-22 degrees was compared with the width of the chiasm obtained by the magnetic resonance imaging using the eight channel head coil. The measured values of all subjects were analyzed using a paired t-test and a correlation coefficient.

Results: We found a reduction in the chiasma width in both glaucoma groups. We found a statistically significant difference in the size of the chiasm (p = 0.0003) between the control group and the HTG group (p = 0.001). The narrowing of the chiasm showed a slight correlation in HTG with changes in the field of vision (r = 0.139) and in NTG a moderate correlation (r = 0.375).