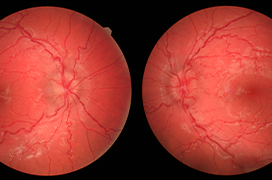 Published in Czech and Slovak Ophtalmology: 2022 - 4

Goal: This paper describes a case of the long-term monitoring of a patient with optic nerve swelling on the ocular background (papilledema), accompanied by symptoms of intracranial hypertension, on whom a genetic examination was performed as part of the differential diagnosis, confirming Leber Hereditary Optic Neuropathy with the m.3460G>A mutation.

Casuistry: During the examination of a 5-year-old patient after an alleged head injury at a bouncy castle, an optic nerve papilla with unclear boundaries was described in the ocular background of both eyes. Neurological examination, including brain Magnetic Resonance Imaging, was indicated to rule out possible intracranial hypertension. Both examinations yielded a finding within the norm. After 8 years of regular follow-up, the patient attended our clinic with acute problems in terms of sudden visual impairment during baseball training. The performed eye examination revealed a deterioration of the vision of the right eye on counting fingers to 50 cm, vision of the left eye to 0.4 naturally, a slowed photoreaction of the right pupil, prominent optic nerve papilla with unclear boundaries on both eyes, dilated and more coiled vessels with a crossing phenomenon; the retinal periphery shows no focal changes. Due to the swelling of the papilla, acute deterioration of the vision and the suspected intracranial hypertension, the patient was immediately referred for neurological examination and subsequent hospitalization. There, the patient underwent computer tomography of the brain, venography of the dural venous sinuses and an initial laboratory examination that showed no pathology. There was increasing headache, nausea and vomiting throughout the period. A lumbar puncture was performed. The cerebrospinal fluid pressure before sampling was 285 mmH2O and 100 mmH2O after sampling. The biochemistry of the fluid was normal, with negative microbiology. Evoked visual potentials had bilaterally prolonged latencies, which corresponds to optic nerve compression. An ophthalmological examination ruled out a drusen papilla. Using Optical Coherence Tomography, a 600 µm edema was detected. The patient underwent two relieving lumbar punctures, which led to a subjective improvement, without objective improvement. Finally, the neurosurgeon referred the patient for ventriculoperitoneal drainage. Due to the impaired vision and lack of response to the therapy induced, a genetic test was performed, which confirmed Leber Hereditary Optic Neuropathy with the mutation of m.3460G>A.

Conclusion: Despite the substantially improved identification of the Leber Hereditary Optic Neuropathy, the diagnosis may still be significantly delayed. The variability of initial findings, the rare incidence of the disease and few well-defined symptoms of the disease lead to significant diagnostic difficulties and late commencement of treatment. It is not possible to say whether there was a coincidence of IIH and LHON, or whether the signs of IIH are a possible concomitant of the acute phase of LHON.