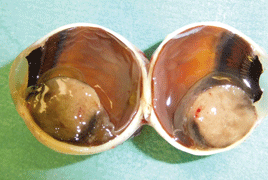 Published in Czech and Slovak Ophtalmology: 2016 - 4

Keywords: malignant melanoma of the uvea, mutation of the BRAF gene, chromosomal abnormalities as a prognostic factor

Aim: The aim is to assess the BRAF gene mutations in patients with posterior uveal melanoma.

Material and methods: Retrospective analysis of the group of patients with malignant melanoma of the uvea, who were indicated to enucleation between 1.1 2015 to 1.3.2016. We analyzed stage of uveal melanoma, volume, cell type and BRAF gene mutations.

Results: In clinical study of 20 patients after enucleation due to uveal melanoma at the Department of Ophthalmology in Bratislava, patient age was ranged from 22 to 89 years with a median of 62 years. In 14 patients (70 %) enucleation was the primary treatment and in 6 patients (30 %) enucleation was after irradiation (brachytherapy, Leksell gama knife, linear accelerator). In 17 cases (85 %) the mutation of the BRAF gene was negative and in 3 cases the sample was not assessable for the BRAF mutation.

Conclusion: BRAF gene mutation is confirmed by several studies found in malignant melanoma of the skin. The histopathology findings in our group did not confirmed our theory, that since the uveal melanoma itself has the similar origin as skin melanoma, should also contain a BRAF mutation.