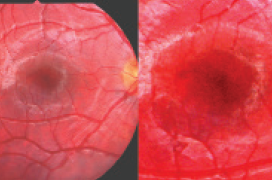 Pre-Retinopathy of Type 1 Diabetes in The Context Of Functional, Structural and Microcirculatory Changes in The Macular Area

Published in Czech and Slovak Ophtalmology: 2021 - 4

Aim: The authors assessed the development of intraocular changes in type 1 diabetes (T1DM) from the onset of the disease leading to diabetic retinopathy (DR).

The quote: “There must be an intermediate stage between the physiological intraocular finding and the diabetic retinopathy itself “, (prof. Jan Vavřinec).

Methods: A two-year study (2018 and 2019) was conducted at the Department of Ophthalmology of the Teaching Hospital Kralovske Vinohrady in Prague (Czech Republic). There were 54 patients aged 17–42 years, the detection of T1DM ranged between the 1st and 14th year of life, with a duration of 12–35 years. Individual patients were always examined simultaneously by three methods: CS (contrast sensitivity), SD-OCT (spectral domain optical coherence tomography) and OCT-A (optical coherence tomography-angiography). We examined 106 eyes once and in a comprehensive manner.

Results: We have shown that there is an intermediate stage between the physiological finding on the retina and DR, so-called diabetic pre-retinopathy (DpR). Subsequent redistribution of the observed into two DpR subgroups was derived from the size of the FAZ, either with its smaller area or with a larger area determining the microvascularity of the central area of the retina. The results of both other methods were assigned to these values. For SD-OCT, the depth of the fovea (the difference between the central retinal thickness and the total average retinal thickness) was determined, which was affected by the increased the macular cubature. In all patients it was on average 10.3 μm3. The retina in the central area was significantly strengthened compared to the healthy population at the level of significance p ≤ 0,001. We divided the actual DpR into an image: DpR1 in 26.5 % of eyes – condition with an average shallower fovea only by 21.5 μm below the level of the surrounding retina and an average narrower FAZ: 0.165 mm2 and with a more significant decrease in CS; DpR2 in 40.5 % of eyes – condition with average deeper fovea by 42 μm, i.e., more significantly and average larger FAZ: 0.325 mm2 with lower decrease of CS. At the same time, other changes in microvascularity were noted, such as disorders in the sense of non-perfusion in the central part of the retina of various degrees. This finding differed significantly from changes in already established (non-proliferative) NPDR in 36 % of eyes, when a significant decrease in CS with normal visual acuity was found 4/4 ETDRS. Statistical differences in CS between DpR1 and DpR2 and NPDR were determined – always p ≤ 0.001. The average depth of the fovea was NPDR: 29.5 μm. NPDR had the largest average FAZ: 0.56 mm2. Also significant were the most significant changes in non-perfusion and especially the presence of microaneurysms.

Conclusions: These three non - invasive methods helped to monitor the dynamics of the development of ocular changes in T1DM of better quality than the determination of visual acuity and ophthalmoscopic examination. Increased retinal volume induced hypoxia of visual cells with subsequent dual autoregulatory mechanism conditioning two types of diabetic pre-retinopathy before the onset of DR.