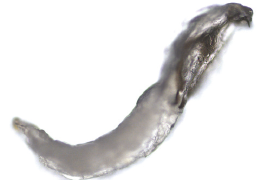 The work deals with atypical conjunctival infection of Czech patient with Oestrus ovis larvae. Ophthalmomyiasis is infestation of mammalian eyes by the larvae or worms of some flies. The most common cause of human myiasis is the Sheep. Shepherds are infected in habitats, but human eye disease outside the areas of abundant hamsters is rare. We describe a case of eye disease in a middle-aged man from the Czech Republic who spent a summer holiday seven weeks before examination in the north of Greece. During the first examination he was completely treated and no further problems were reported. Ophthalmomyiasis externa should be considered as a possible infection of travelers to the southern endemic regions when returning with an acute causeless onset of a one-sided foreign body sensation in the eye.