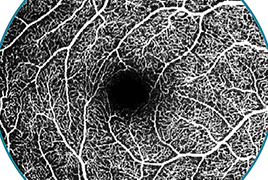 Aim: Learn about the development and changes in foveal avascular zone (FAZ) and vascularity of retina in the surrounding zone, depending on the duration in young diabetic patients type 1 (T1DM).

Methods: As part of regular one-year examinations of young T1DM patients at the Eye Clinic of the University Hospital Královské Vinohrady in Prague (Czech Republic, EU) from January to December 2019, OCT angiography using the device Spectralis (Heidelberg Engineering) was included. Forty patients aged 18 to 30 years were examined, median 21 years. T1DM was diagnosed in childhood and lasted for more than 10 years. At the same time, a control group of forty individuals of similar age, without metabolic and other general disease was examined, normal visual acuity and physiological fundoscopic finding were obligatory. The FAZ size was evaluated in both groups (using built-in function "Draw Region"), also its shape, density decrease and change in character of vascularity of the retina was assessed.

Results: In the control group, the FAZ area ranged from 0.06 to 0.4 mm², with an average of 0.253 ± 0.092 mm² and a median of 0.27 mm². It was not affected by a fundamental change in its round shape and the surrounding capillary netting was regular and reasonably dense. In T1DM patients, the FAZ area was in a wider range, from 0.05 to 0.64 mm², an average of 0.300 ± 0.132 mm², and a median of 0.31 mm². The difference in FAZ across-the-board evaluation was statistically significant (p = 0, 009). Diabetic preretinopathy (DpR) was defined by the irregularity of the capillary density up to the manifestation of non-perfusion, in 61% of cases the size of the FAZ was changed. In diabetic retinopathy (DR) there was always an irregularity of the FAZ shape with its enlargement, manifestation of non-perfusion, capillary dilatation and rare microaneurysms.

Conclusion: Changes in FAZ size corresponded to the stage of T1DM on the fundoscopic finding of the eye depending on its duration. The initial increased amount of foveal capillaries, which resulted in decreased FAZ area, was followed by a gradual decrease in capillaries and increased FAZ area, consistent with the manifestations of DpR. It was accompanied by a change in capillary density in macula to eventual non-perfusion. On the contrary, the increase in the FAZ area and its irregularity accompanied by non-perfusion of the capillary net and microaneurysms corresponded to the development of DR already.